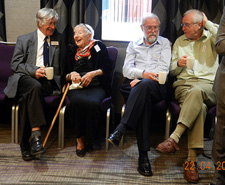 2019 Reunion
A very successful 2019 Reunion was held at the Victory Services Club, London on Sunday 7 April 2019. Details in the official Press Release here: Press Release
Photographs of the reunion can be seen 2019 Reunion Photos. and a Report of the Reunion

For 2017 we returned after 12 years to HAC – The Honourable Artillery Company in City Road, London.
Some pictures can be seen  here 2017 Reunion and the report here Reunion Report

The 2016 LEO REUNION.
On 10th April 2016 the reunion returned for a second time to the historic Middle Temple Hall in London.     Photographs by Mike Hally can be seen here 2018 Reunion…

The 2014 LEO REUNION.
The 2014 Diamond Leo Reunion was held on 6th April 2014, in the magnificent surroundings of the Parliament Chamber in Middle Temple, one of the four ancient Inns of Court. Pictures of the occasion can be seen here 2014 Reunion..

The 2012 LEO REUNION.
The 2012 reunion was held on 22 April 2012 in the same hotel in Southampton Row as last time, but now known as The Doubletree by Hilton Hotel. Pictures of the event can be seen here 2012 Reunion

The 2010 LEO REUNION.
In 2010 the reunion was held at lunchtime on a Sunday, (April 18th). This was obviously popular with the ageing members of the Society and the room at the Park Hotel in Southampton Row was full with approx. 120 people. Some Pictures here 2010 Reunion…

The 2007 REUNION.
A combined Anniversary/Reunion event to celebrate the 60th Anniversary of J Lyons agreement to provide funding for the project, in October 1947, which led to the building of LEO 1.
A change of venue for the 2007 reunion. It was held on 19 October 2007 at the Bramah Café and Museum in Southwark, London.
Possibly as a result of the change and the lower cost, we had a record turnout. A waiting list was started and eventually we had to turn people away! The reduced cost was due to a generous donation from the Association for Information Technology, assistance with administration costs from the BCS Computer Conservation Society and very reasonable charges from Don Riley, the owner of the Bramah Café and Museum and ex-Leo employee.
The event started in the 5th floor penthouse, with two interesting talks on the Edsac and Leo computers, and some of the personalities associated with them, by David Hartley of the BCS and Frank Land of the LSE, an early Leo employee. Later we moved down to the restaurant area for more reminiscing and food & drink. (An early post-reunion email from one happy guest said that “the beef stew was out of this world. Some Pictures here 2007 Reunion

The 1999 REUNION – The 50th Anniversary of the LEO Project
Reunion held at the HAC, London, November 1999 – Report & Pictures