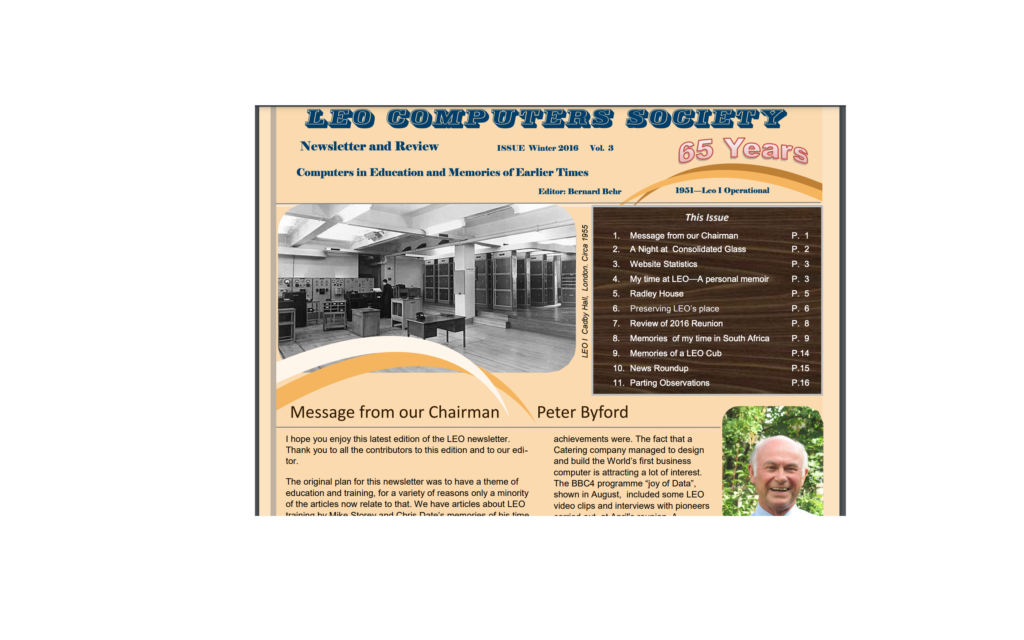 My introduction to C&E computing was via Omnibus Weekly Order 10/1965 (remember OWO’s?)
which advertised vacancies for Programming Staff in the Automatic Data Processing (ADP) Unit at
Southend-on-Sea. This was a trawl of the Department “—to find about 6 Programmers and 3 Higher
Programmers to augment the planning staff at Southend”.
2 After a full day of aptitude tests at The Civil Service Commission, Saville Row, I arrived in August
1965 at Southend to be met by Derek Oakes, Officer, ADP. Derek, along with fellow Officer Jack
Ottaway, owned a large guest house in upmarket Thorpe Bay called “The Haven” which was staffed
by ‘au pair’ girls and had draught Guinness on tap. The Haven was used by young C&E Officers
coming to Southend (or passing through after training) and was referred to as a “den of iniquity”;
either affectionately or censoriously depending on one’s viewpoint. I regret to have to say that The
Board ruled it off limits eventually.

Could be relied upon to identify the origin of famous lines from literature (an ‘oracle’). Mostly staid but
occasionally and surprisingly wild; once, having demanded, and got, his entrance money back from the
Crazy Horse Saloon I had to restrain him from going back for his cloakroom fee.

Ben Butler, HEO, Operations.
A real gentleman and a gentle man. Became Ops. Manager and was, in due course, awarded MBE. His
wild side was going on golf holidays with 3 other blokes in a tiny caravan. Best joke “eggs for breakfast,
I’ll be bound”
Laurie Fenne, CO, Stats.Team
Eternal jester. Remembered for (inter alia) being admonished by Arthur Gregson for sitting for some time
on top of a coat rack. Arthur never found out that Laurie had been plonked up there by Ken Box and Fred
Baynham and couldn’t get down! Laurie later became Captain of Ballards Gore Golf Club and arrived on
his opening day by helicopter.
John Fisher, EO Programmer, Stats.
Bane of OPS off-line staff, who organised computer runs. John believed in using the energy of the
machine rather than his own so he only ever corrected the ‘immediate’ fault, so his programs crashed again
a few lines further on. I think he was much more interested (and talented) in creating songs and music than
computer programs !.
Bob Fowkes, Officer Programmer, Stats.
Already a bit long in the tooth as an Officer in Dover he took to computers like a duck to water and was
with me on our programmer training course at Ealing in 1965. He was a member of MENSA, a slightly
reluctant (but good) golfer and liked fast cars. Rose to become Assistant Secretary in charge of the
Computer Development Division.
Arthur Gregson, Assistant Accountant, Payroll.
A generous-hearted, clean-living, violin-playing patriarch. Golf and computer-challenged but an enthusiast
of both. I was with him at Belfairs when he got a ‘hole-in-one’ after missing the ball completely with his

first swipe. Memorably once allowed one of his staff to grow mushrooms in boxes of horse manure on
cabinets in the Payroll room (but he had the first ‘flush’!).
Stan Harwood, HEO, Warehousing.
Cynically amusing, eccentric. Boolean algebra freak. Spoke with a laid-back and confident drawl. Could
not be ignored but gave impression of living on a different planet.
Johnny Milsom, OE Ops.
Wheeler-dealer, sometime golfer. Once charged me half-a-crown to borrow a putter. T

He sometimes left his desk for hours with pen on paper and part-way through a sentence. I think he made
HEO Programmer before he left the Service.
Bill Sant, EO Programmer, Payroll.
Arrived on promotion from DCO, Chester. Probably the most astute of the new programmers and by far
the best behaved; rarely getting tipsy at the numerous celebrations of computer successes and never lusting
after the Data-Prep girls. Nevertheless he blotted his copybook by declining nomination for a Queen’s
Birthday Honour in the 1980’s; a decision he has since much regretted.
Ernie Saville, EO, Operations.
Led a ‘chequered’ life. Served in the Royal Navy on Corvettes in WW2 and, not being a natural sailor,
was constantly sick with subsequent damage to his stomach. Could charm the birds out of the trees and
was put in charge of a mostly female Paper-Handling Section (what else?). Married four times and was
very happy with his 4th wife (who was somewhat younger than some of the kids from his earlier marriages)
and with whom he had 2 children. Would warrant a book and a film.
Bob Shemmings, Officer Programmer,Warehousing Suite.
Left soon after I arrived. Went to work for Freemans (catalogues) on their computer. Became Managing
Director of Freemans and was a typical case of talented C&E staff making good ‘outside’ after C&E
computer training/experience.
George Smith, HEO Stats.
Spoke words of wisdom out of the side of his mouth. Being a bit deaf I found it easier to read his lips by
standing next to him. He made an ‘aside’ after interviewing me for promotion to SEO that I was a “rough
diamond” (I was not sure what that meant at the time and thought I had been insulted). George rose to
Assistant Secretary in charge of the Computer Operations Division.
Mac Vann, CO, Operations.
Responsible for arranging programmer jobs in a queue for running on the computer. Assiduous in the
performance of his duties, and a source of terror to programmers who did not fill in the ‘run’ forms
meticulously.
Doris Vidler, CO, Data Preparation.
In charge of the Data Prep. girls who worked on the top floor of Portcullis House and who had to assemble
and type Programmers’ codings. Doris was sometimes referred to as “Vidler on the Roof”, and the
programmers had to get past Doris to even talk to her girls! (a matriarch supreme).
Charles Vince, SEO Statistical Suite.
A laid-back opportunist. On being appointed Computer Manager over all of the early programming teams
he became a prolific, but shrewd, delegator. I once accompanied him to a computer conference at
Harrogate, where I attended all of the sessions and reported back to Charlie each evening on his return
from excursions to The Dales. He spent a lot of time in his office, but eventually was asked to remove a
sofa and camp bed. He always knew where you could get the cheapest tin of paint.